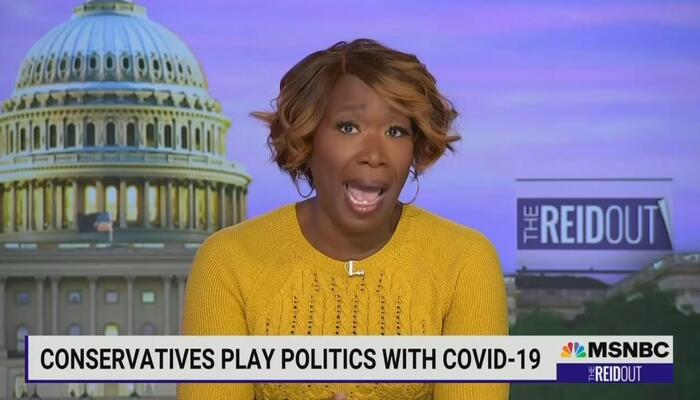 Right off the top of Wednesday’s The ReidOut, MSNBC host Joy Reid resurrected a truly poisonous claim from September 15 that not only do the tens of millions of Americans on the center-right “love” COVID, but they idolize it to the point that they want to consume it like “cereal” while inflicting mass murder.

And that was on top of what’s become a dangerous narrative that conservatives and Republicans shouldn’t be allowed to have agency because they’d otherwise use their “foaming at the mouth brand of conservativism” to seize power. Of course, Reid had plenty of help and zero pushback, including from Principled Conservative Tim Miller, who concurred that conservatives are indeed homicidal sociopaths.

Reid started off with said shtick about the right, which has come across like a combination of driving viewers to hide under their sheets at night and wanting to wring someone’s throat (click “expand”):

We begin The ReidOut with a renewed effort by the American right to make sure Covid is here to stay. First, they came for the schools. Now, it’s the businesses. An astonishing 180 for the party that once claimed it stood for limited government, free enterprise, and protecting corporate America from burdensome regulation. These days, the once Grand Ol’ Party stands for nothing other than the quest for absolute power, which they intend to achieve by embracing a foaming at the mouth brand of conservatism that includes worshipping the disgraced former president, dismantling democracy, and forcing businesses — forcing them to operate on their terms, which happen to include opening the doors to the pandemic with the worst of them associating the killer virus with freedom itself. They’ve also launched a new national past time empowering anti-vaxxers and anti-maskers to mob up and scream at, spit on, and attack workers who have to mask up to work. When they’re not harassing teachers and health care professionals or moms walking their kids to school for masking up to prevent Covid, a life does need variation.

And we now have abortion bounty hunt Governor Greg Abbott of Texas banning any entity in his state, including private businesses from mandating Covid vaccinations for their workers or their customers. He’s denouncing vaccine mandates as federal over reach while his Covid-loving side kick Florida Governor Ron DeSantis is making good on his promise to punish local governments for taking steps to protect workers because Covid must be let in.

Reid then leveled a below-the-belt attack when she seemed to trumpet the death of Turning Point USA co-founder Bill Montgomery from COVID last year, flaunting his passing in light of a Charlie Kirk tweet about the pandemic.

After a kooky aside that Donald Trump Jr. “doesn’t care about black people,” Reid unleashed her demented claim about the right having a COVID fetish:

Miller explained that the opposition to the COVID vaccine and vaccine mandates are rooted in “simple contrarianism, anti-elitism,” and “populism” run amok, but he was only getting started as he illustrated his inability for shame when he then argued that, “if that [belief in contrarianism] means letting unnecessarily their own citizens die,” elected officials with R’s next to their names will “let their own citizens die.”

Citing Abbott as one such mass murderer, Miller ironically decried the right as having engaged in “unconscionable” behavior that’s obsessed with “positioning” and “negative partisanship[.]”

Talk about not seeing people he disagrees with as human beings.

Fellow progressive strategist Don Calloway concurred, griping the GOP “has so — so — so aggressively adopted anti-intellectualism that they don’t see it as inconsistent to say — to pass Texas abortion ban…and not have a problem with the inconsistency between that and raging against people not wanting to get vaccinated[.]”

Though she’s said enough incendiary things for one night, Reid brought up Senator Ted Cruz (R-TX) in the context of Brooklyn Nets star Kyrie Irving refusing to get the coronavirus vaccine to argue Cruz has a deep-seated aversion to Black people:

Later, Reid reiterated her cockamamie claim, adding that Cruz would be unhappy if Irving remains on the sidelines and not working because, as per Reid’s reading of Cruz, the Texas senator sees unemployed black people as burdensome and lazy.

And not to be outdone, Miller returned to his talking point about Abbott being a murderer as he predicted there would be a nursing home scandal taking root (click “expand”):

Look, I mean, look at this, I want to go even a step lower than that. Think about if you’re a nursing home — right — and if you’re a nursing home in Texas and you have a lot of, you know, obviously, elderly people there who may be vaccinated, but they — they have co-morbidities. They have other reasons why they’re — they, you know, could have breakthrough cases, you — I think everyone who has their mom or aunt or uncle or grandparent in a nursing home would want that place to have a vaccine mandate, right? Like, who wouldn’t want that?

In Texas, Greg Abbott is banning nursing homes from being able to have a vaccine mandate, so you could have an unvaccinated nurse coming in and there’s nothing that you can do it legally in the state. It’s absolute madness.

To be clear, there was no mention of former Governor Andrew Cuomo (D-NY) and the Empire State’s deadly nursing home scandal. But with his side to protect, Team Biden Republicans have to find a way to change the narrative.

Reid’s latest acts of hatred insisting over 70 million Americans on the right love Covid was made possible thanks to the willful endorsement of advertisers such as BMW, Farmer’s Insurance, and Gold Bond. Follow the links to see their contact information at the MRC’s Conservatives Fight Back page.

To see the relevant MSNBC transcript from October 13, click here.

A Bitcoin ETF Is Here. What Does That Mean?