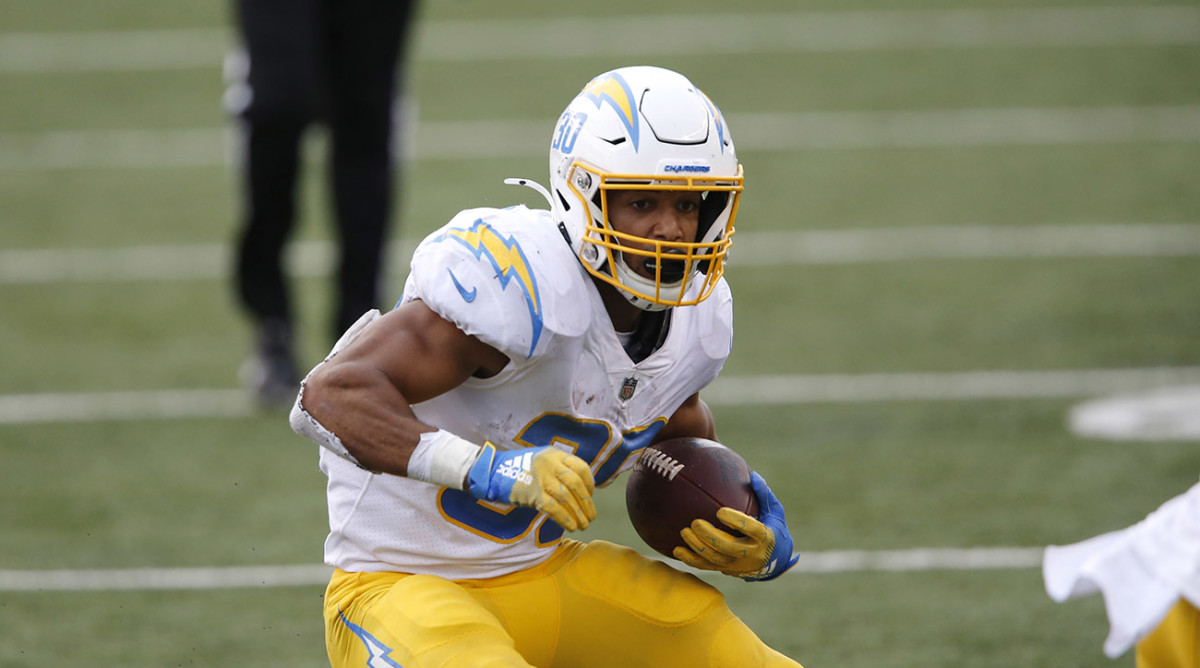 Good morning, it’s finally NFL game day!Ahead of us we have our first uninterrupted 12 hours of NFL football this fall. In today’s Winners Club we have injury updates, ATS picks, daily fantasy plays and updated start ‘em, sit ‘em and player rankings. Keep reading to see who makes the cut and who Sports Illustrated’s experts recommend you cut from your lineups.First, we’ve got injury reports for players with pesky red Q’s making you doubt their status ahead of Sunday kickoffs.Injury report1:00 P.M. EST kickoffs:Chargers running back Austin Ekeler (hamstring) is expected to play, according to multiple reports. Ekeler had been held out of multiple practices leading up to Los Angeles’ opener on the road against Washington.

Joseph Maiorana-USA TODAY Sports
Browns receiver Odell Beckham Jr. is expected to play today against the Chiefs barring any last-minute setbacks, according to multiple reports. The Browns pass catcher tore his ACL early last season. We’ll have an update on OBJ’s status as we near kickoff at @SI_Fantasy.Bills receiver Emmanuel Sanders (foot) is questionable but is expected to play, according to NFL Network’s Ian Rapoport. Buffalo gets the Steelers at home to begin the season.Colts quarterback Carson Wentz (foot) and guard Quenton Nelson (foot) are both good to go against Seattle, according to multiple reports. Their good health and quick returns are good news for running back Jonathan Taylor.4:25 P.M. EST kickoffs:Giants running back Saquon Barkley will play against the Broncos, according to Rapoport. He was fully cleared by doctors this week after recovering from an ACL tear last season. The plan is for him to be “eased in and used sparingly.”Giants tight end Evan Engram (calf) is out against Denver, according to multiple reports. Kyle Rudolph will get the start for New York.And one more Giants update: receiver Kenny Golladay (hamstring) will play and did not carry an injury designation into the weekend. He only played five games in all of 2020 with the Lions.Jets receiver Jamison Crowder (COVID-19 list) is out against Carolina, according to multiple reports. Keelan Cole (knee) is a game-time decision, according to Rapoport. Corey Davis and Elijah Moore could be in for a big workload against the Panthers.Sunday Night Football:Bears receiver Darnell Mooney (back) is expected to play against the Rams, according to Rapoport. Monday Night Football:Raiders running back Josh Jacobs (toe) is “good to go” against the Ravens, according to ESPN’s Paul Gutierrez. He was not listed on the team’s final injury report after being limited in practice.Pregame ReadingSI Winners Circle LIVE Stream: Tune in on YouTube, Twitter or Facebook at 12:00 pm (EST) for the latest injury updates and Start/Sit Advice. Plus Jennifer Piacenti, Bill Enright, and Michael Fabiano are answering your fantasy football lineup questions and handing out NFL Player Props from SI Sportsbook. Staff Best Bets: SI’s betting analysts are coming to you each week with their five most confident NFL picks. This week, they’re all over Washington -1 and Browns +5.5. See where else they overlap and where they disagree and get your bets in on SI Sportsbook. DFS Plays: Shawn Childs has the best stacks and value plays in DFS for Sunday lineups. No surprise: Patrick Mahomes made the cut. Even with a high salary, Childs thinks he’ll be worth the price tag against Cleveland.Player Rankings and Projections: Updated to account for the changes to Baltimore’s backfield, Childs has projections and rankings to help you make sense of murky situations. Childs has Ty’Son Williams leading the Ravens backfield — click to see what that will be worth, though, and how the rest of the carry breakdown shakes out.Start ‘Em, Sit ‘Em: Michael Fabiano has updated advice for players on the fringe of your lineup and DFS choices in his famous Start ‘Em, ‘Sit Em. Raheem Mostert against Detroit might be my favorite value at running back this week. Click to see who else made his list.

Chuck Cook-USA TODAY Sports
Questions and a Humble AskThere’s a few ways to field fantasy and gambling advice from the SI Fantasy and Betting Teams and make sure you win your league. You can tune into the live show at noon where Enright, Fabiano and Piacenti go over injury updates and start ‘em, sit ‘ems. Or… you can send in questions to winnersclub@si.com or hit my DMs: @Kkylewood.I also ask that if you’re enjoying the newsletter so far, please share it with your family and friends and even your opponents in your leagues! They can subscribe to Winners Club as well as other SI newsletters at si.com/newsletters.Play of the Day and What I’m Watching ForPlay of the Day: My play of the day on Thursday was Tom Brady, which I feel pretty good about. He was narrowly outscored by Dak Prescott, who looked awesome, which was really great to see. Today I’ll give you some DFS plays that I’m rolling with. At quarterback, I like the Ryans: Matt Ryan and Ryan Tannehill. Both are relatively cheap and have good matchups; the Falcons get the Eagles at home and the Titans host the Cardinals.Speaking of the Cardinals, I like Chase Edmonds up against Tennessee’s defense. This should be a high-scoring game and if Edmonds is truly the guy in Arizona, his volume should make his very low price tag well worth it. I’ve already made it clear I like Tee Higgins today, but at receiver I’m also in on pass catchers in the Jets vs. Panthers game. Corey Davis and Elijah Moore both look like good plays, and you can get Robby Anderson and D.J. Moore for cheap and hope that the Sam Darnold revenge game comes to fruition.What I’m Watching For: I already laid out the games I’ll be watching today in Thursday’s newsletter, so instead I’m going to focus on what I’ll be looking for. I’m really curious to see how the young quarterbacks perform. The first three picks of the draft were quarterbacks in a loaded class at the position, and we know for sure we’re seeing two of them today in Trevor Lawrence and Zach Wilson. There’s high expectations for rookies starting Week 1 and pressure on second-year quarterbacks with a true offseason program behind them.How comfortable does Joe Burrow look behind the Bengals offensive line? What strides did Tua Tagovailoa make this offseason? Does Mac Jones look as good when he’s not throwing to the Heisman Trophy Winner? Can Justin Herbert repeat his greatness? How is Trey Lance used by Kyle Shanahan?

Jasen Vinlove/USA TODAY Sports
We won’t get answers to all of these questions today, and there’s plenty more about this new generation of quarterbacks, but today ends the offseason speculation. It’s officially time for Week 1 overreactions.Enjoy your Sunday and best of luck in your matchups and with your bets. I’ll talk to you on Tuesday. Hopefully you and your team are 1-0.