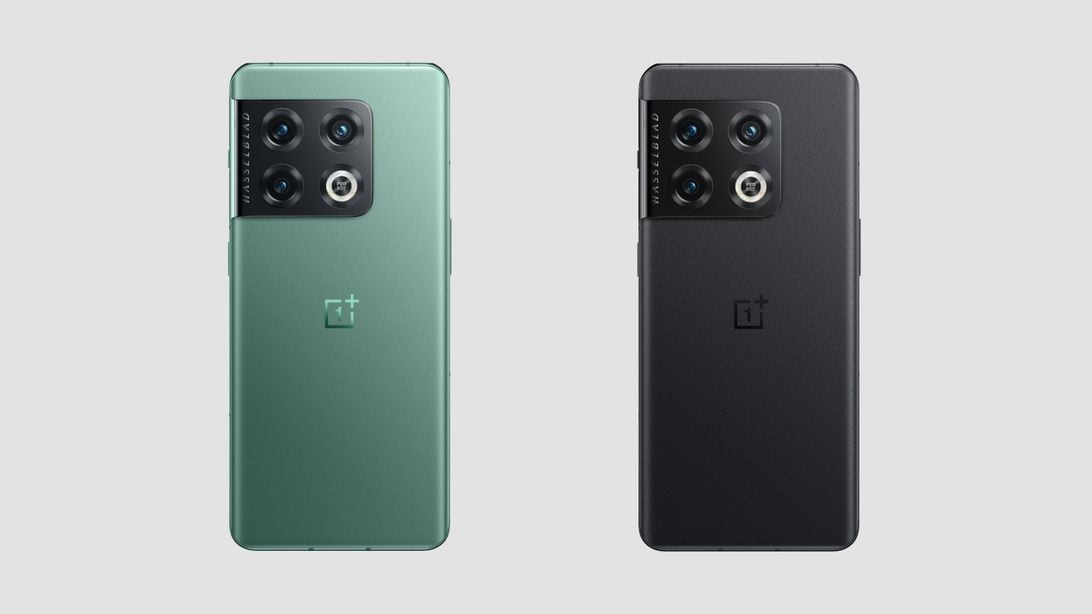 Renders of the OnePlus 10 Pro phone in Emerald Forest and Volcanic Black colors. The phone was officially revealed on January 11, 2022.(Photo:-OnePlus)After giving details on its new flagship phone  last week, OnePlus has finally unveiled the OnePlus 10 Pro in China.Even now, there are still a few things in the mystery, like the introductory price when it goes on sale in China on January 13 or when it is available elsewhere (OnePlus has  said it will only be launched globally. ‘in 2022). But what we do know is that with powerful specs and sharp cameras, the OnePlus 10 Pro could be one of the best phones to release in 2022.These details OnePlus dropped up until now confirmed that the OnePlus 10 Pro would pack the new Snapdragon 8 Gen 1 chipset and run on the company’s OxygenOS 12 (based on Android 12), which folds in “feature-rich” parts of Oppo’s ColorOS for the first time. That’s still true and we now know the phone will pack the Snapdragon X65 modem, which supports more 5G networks, frequencies and bandwidths along with increasing the maximum download speeds to 10Gbps. While you probably won’t hit that cap with today’s carriers, the new X65 should provide faster and more consistent 5G speeds. The OnePlus 10 Pro also will have up to 12GB of LPDDR5 RAM and up to 256GB of UFS 3.1 storage, which are the same specs as last year’s OnePlus 9 Pro.The 6.7-inch OLED display is the same size as its predecessor’s. It has a maximum 120Hz refresh rate that makes browsing the internet or gaming very smooth, though it adaptively cranks the rate down to even 1Hz (or one frame per second) during low-demand tasks to save battery life. The phone comes in two colors: a seafoamOnePlus has confirmed that its new phone will inherit last year’s rear camera setup, too: a 48-megapixel main camera, an 8-megapixel telephoto camera and a 50-megapixel ultrawide camera with a maximum 150-degree field of view. The 10 Pro will get an improved 32-megapixel camera, which should take sharper photos than the 16-megapixel selfie camera on its predecessor.As the second generation of OnePlus phones to have Hasselblad-tuned-cameras, the OnePlus 10 Pro’s photo capabilities have been refined in a handful of ways. First is an improved Pro Mode that takes photos in 12-bit RAW+, a new format that combines the rich data capture of RAW with on-device image processing to give shots more accurate colors. When taking more casual photos, all three rear cameras have 10-bit color for over 1 billion possible hues.Hasselblad’s influence is also visible in Master Mode, which features three filters refined by professional photographers and artists that make shooting fashion, wildlife and urban spaces  more stylized and unique. For videos, the new Movie mode lets you change settings like ISO, shutter speed, and white balance even while recording for precise control over focus and lighting. The 10 Pro’s 5,000mAh battery is the largest of a OnePlus flagship phone, but it’s the 80-watt wired charging that will set it apart from the competition.The company claims it will bring the phone from 1% up to full charge in a very  32 specific minutes. The phone also supports wireless charging up to 50 watts, which will charge a  nearly dead phone in 47 minutes, OnePlus estimates.  On paper, the OnePlus 10 Pro appears to be a serious contender for the best phones in 2022, although it will have to wait until we can test it at an undetermined later date at a price not yet announced.