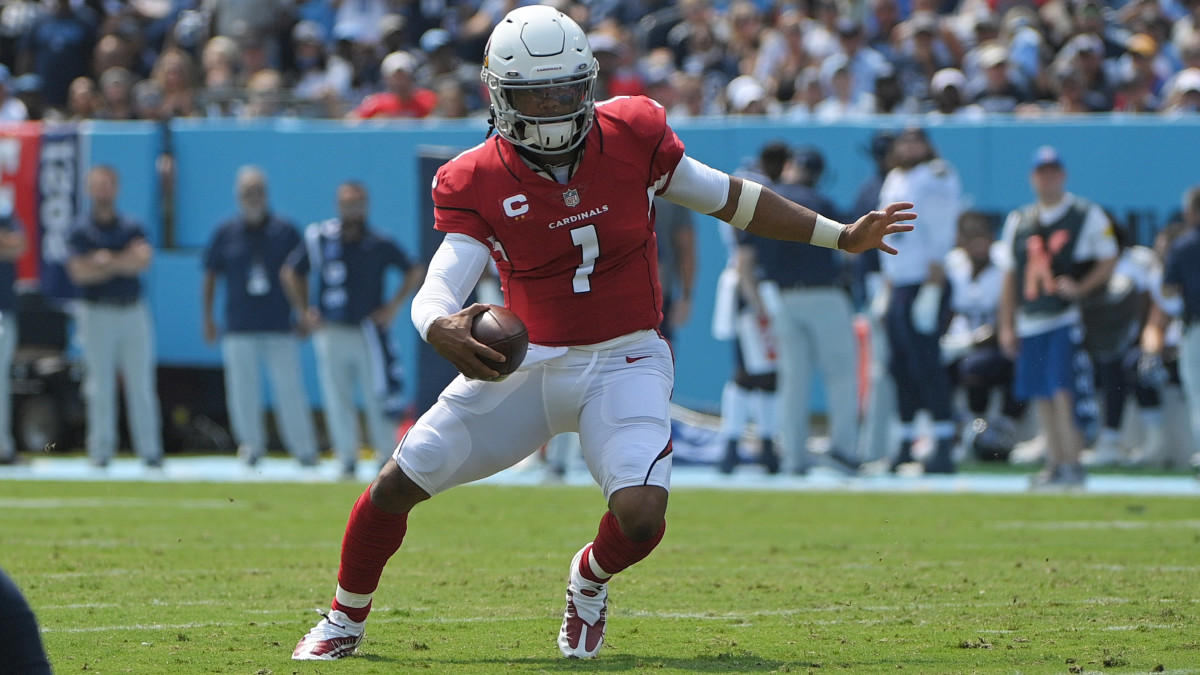 Kyler Murray Was a Human Highlight Reel Against the Titans

Get ready to see a lot more of this.View the original article to see embedded media.He was on another levelHopefully, for Cardinals fans, Kyler Murray’s wizardry against the Titans on Sunday is a sign of things to come.Arizona dominated Tennessee in Week 1, cruising to a 38–13 victory. The Cardinals defense sacked Ryan Tannehill six times and held Derrick Henry to just 58 yards on 17 carries, but it was the team’s offense that really turned heads. Murray was unstoppable. He completed 21 of 32 passes for 289 yards and four touchdowns, and added another 20 yards and a touchdown on the ground. But the box score alone can’t do Murray’s day justice. He made a bunch of jaw-dropping plays that you have to see to believe. His first touchdown of the day was a five-yard strike to DeAndre Hopkins where he was forced back 15 yards behind the line of scrimmage, scrambled to safety and delivered a pinpoint-accurate bullet while running at close to full speed. (Hopkins’s catch wasn’t too shabby, either.)His rushing touchdown was way too easy. The Cardinals lined up in a heavy set and near the goal line and got the Titans defense to bite hard on a fake handoff as Murray used his elite acceleration to leave everyone in the dust and trot into the corner of the end zone. The play that attracted the most attention was this one, which came on a third down in the middle of the second quarter. Murray was chased from the pocket and scrambled halfway to Memphis before delivering a great pass to Rondale Moore for the first down. Pay special attention to how Murray throws the ball to a spot where Moore doesn’t have to worry about keeping his feet in bounds, but also doesn’t have to worry about the defense: As amazing as that play was, my favorite one might have been this bomb to Christian Kirk. Murray, again, was forced to deal with heavy pressure, but he knew he had Kirk running free down the sideline. He backpedaled to avoid the rush and did what every coach tells quarterbacks not to do: throw off your back foot. Murray’s off-balance heave was actually a picture-perfect pass that fell right into Kirk’s hands.Murray has been one of the most exciting players in the NFL since he entered the league in 2019. But exciting and effective can be two very different descriptors. It was clear coming out of Oklahoma that Murray would be a thrilling player to watch, it just wasn’t until his Pro Bowl season in 2020 that it looked like those thrills would translate into wins for the Cardinals. But Sunday’s game showed that Murray’s arm is catching up to his legs. He looked like Aaron Rodgers throwing on the run, but at twice the speed. If Murray keeps playing like that, good luck trying to stop the Cardinals. The best of SISlowly sprinkling in doses of Trey Lance could make the 49ers’ offense a real headache to deal with. … Jon Wertheim’s 50 parting thoughts from the 2021 U.S. Open. … Richard Johnson takes a look at key to Oregon offensive coordinator Joe Moorhead’s gameplan against Ohio State. Around the sports worldThe benches cleared during another intense Yankees–Mets game after Francisco Lindor and Giancarlo Stanton exchanged words. … Conor McGregor tried to fight Machine Gun Kelly at the MTV Video Music Awards. … A girl got too excited to see Tyler Herro on the street, forgot to put her car in park while she asked for an autograph and ran it into a wall. … The course for the Brighton Marathon in England was more than a quarter-mile too long. … The Packers’ 38–3 loss to the Saints was the worst of Aaron Rodgers’s career. … Chris Bosh revealed during his Hall of Fame speech that Pat Riley had given him a championship ring as a recruiting pitch in 2010—and handed it back to Riley during the ceremony.Great insight from JameisChandler Jones was just as incredible as Murray, so much so that the lineman he kept beating owned up to it on Twitter after the gamePitching it 10 yards backwards on fourth-and-1 seems… suboptimalGotta love Washington’s stadiumThe stadium says it was just rainwater and the fans watched the rest of the game from a suiteAn immaculate inning during a seven-inning perfect game bid!These fans in Miami made the catch of the weekendLiverpool’s Harvey Elliott had a horrible injury on Sunday but made a young fan’s day at the hospitalHomer college announcers are the bestI loved the FSU cheerleaders’ reactions to the miraculous endingKicker targeting!Presbyterian coach Kevin Kelley is doing some funky stuffX Games gold medalist Robbie Maddison flipped a bike off a ramp hanging from a helicopterNot sportsA South Dakota man was charged with burglary after he was found inside a closed bar drinking a beer. … A guy in Florida, fed up with the big pothole in the middle of a street, planted a banana tree in it. … A finance company is looking to pay someone $1,300 to watch 13 scary movies while monitoring their heart rate. A good songEmail dan.gartland@si.com with any feedback or follow me on Twitter for approximately one half-decent baseball joke per week. Bookmark this page to see previous editions of Hot Clicks and find the newest edition every day. By popular request I’ve made a Spotify playlist of the music featured here. Visit our Extra Mustard page throughout each day for more offbeat sports stories.