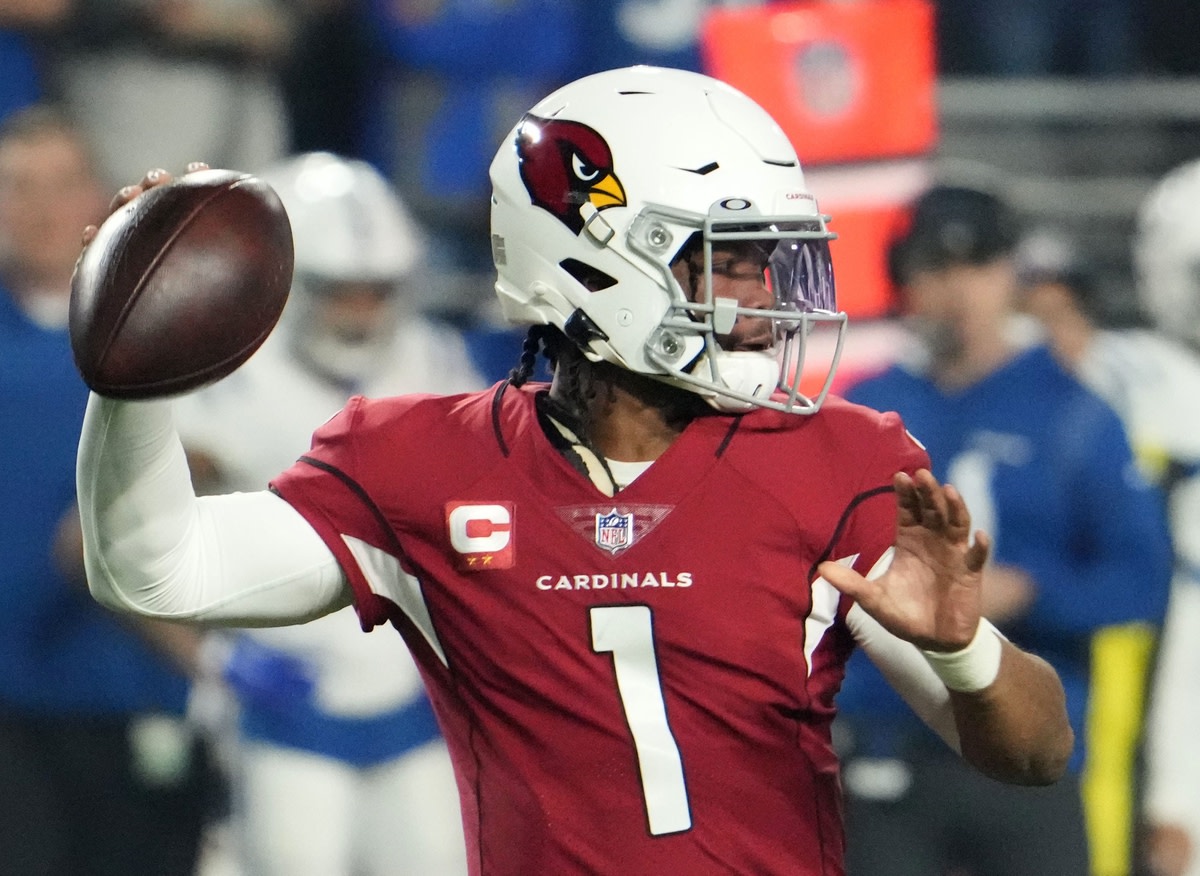 Discover player props odds, plays, and insights for Kyler Murray in his NFL Playoffs contest with the Arizona Cardinals against the Los Angeles Rams.

Nfl Indianapolis Colts At Arizona Cardinals
There will be player prop bets available for Kyler Murray ahead of Monday’s NFL action at 8:15 PM ET live on ESPN. The NFC Wild Card round features a matchup between Murray’s Arizona Cardinals and the Los Angeles Rams from SoFi Stadium in Inglewood, California.Want more in-depth sports betting and fantasy insights? Sign up today for the SI Winners Club Newsletter.Kyler Murray Prop Bet OddsView the original article to see embedded media.Kyler Murray Prop Bet Stats and TrendsSeason StatsMurray has 3,547 passing yards (221.7 ypg) to lead Arizona, completing 69% of his throws and tossing 23 touchdown passes with 10 interceptions this season.He’s also rushed 83 times for 388 yards and five touchdowns, averaging 24.3 yards per game.The Cardinals have run 54.1% passing plays and 45.9% rushing plays this season. They rank 14th in the NFL in scoring.Murray has thrown 65 passes in the red zone this season, 38.2% of his team’s red zone plays.Click over to SISportsbook and find the latest player props and odds for Murray’s matchup with the Rams.Matchup vs. Los AngelesIn six matchups against the Rams, Murray averaged 233.2 passing yards per game, 22.3 yards fewer than his over/under for Monday.Murray threw multiple touchdown passes three times over three of those outings against the Rams.The 263.3 passing yards the Rams yield per game makes them the NFL’s 24th-ranked pass defense this season.The Rams have given up 17 touchdowns through the air (1.0 per game). They are second in the NFL in that category.Recent PerformancesIn last week’s matchup with the Seahawks, Murray completed 71.8 percent of his passes for 240 yards, while tossing one touchdown.He added five carries for 35 yards, averaging seven yards per attempt .Murray has put up 748 passing yards (249.3 per game) and has a 67.5% completion percentage this year (81-of-120) over his last three games, while throwing four touchdowns and zero interceptions.He also has 153 rushing yards on 18 carries, averaging 51.0 yards per game.Murray’s Arizona TeammatesPowered By Data Skrive