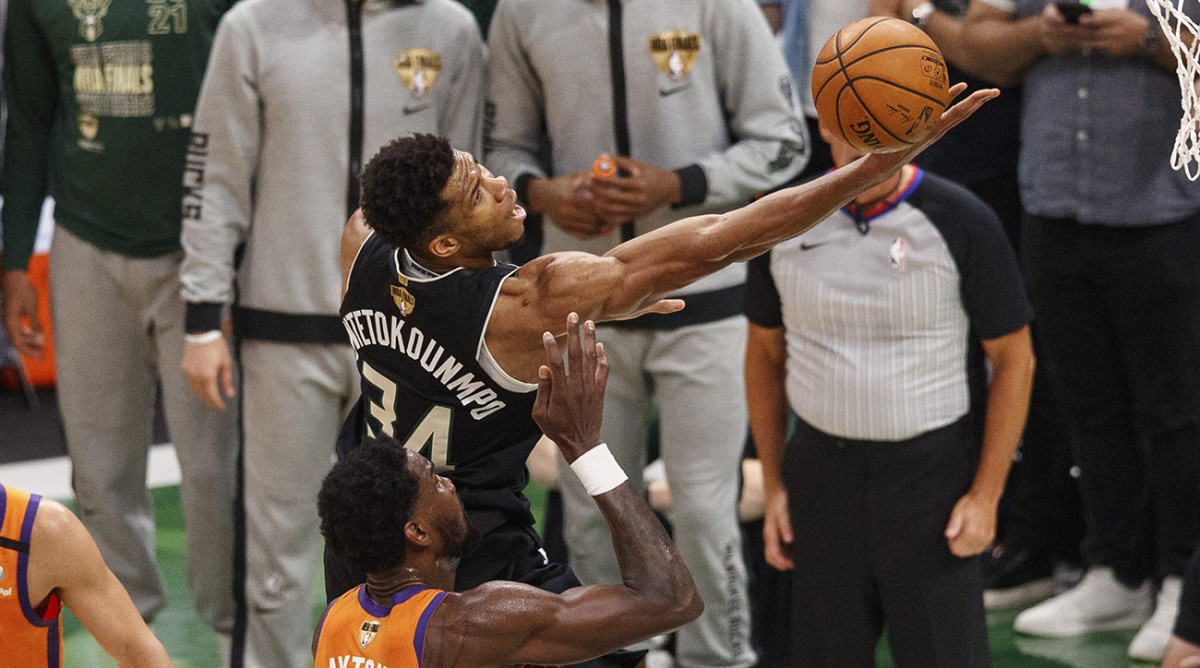 The Bucks’ Game 6 closeout was the culmination of years of patience and hard work in Milwaukee, from the players to the front office.View the original article to see embedded media.In June of 2013, a spindly Greek forward with a five-syllable last name was researching real estate in Atlanta. Giannis Antetokounmpo believed he was ticketed for the first round of the NBA draft and it was the Hawks, with a pair of picks in the back half of the round, he suspected were most likely to take him. Hours before the draft, Antetokounmpo’s phone rang. It was then-Bucks GM John Hammond, calling to let Antetokounmpo know Milwaukee was interested. Giannis, with little understanding of the U.S. landscape, did what anyone would: He Googled Milwaukee.It’s fitting then that eight years later, Giannis has put the Bucks on the basketball map. It was Milwaukee 105, Phoenix 98 in Game 6 of the NBA Finals, clinching the Bucks’ second NBA championship, ending a 50-year drought. At 26, and just a few weeks removed from what appeared to be a catastrophic knee injury, Giannis submitted one of the greatest Finals performances in NBA history, capping it off with a 50-point, 14-rebound effort in Game 6. “It’s hard to find more words to describe what Giannis does,” said Bucks coach Mike Budenholzer. “He’s the MVP of the NBA Finals.”What a game. What a wild, twisting, unpredictable game. The Bucks jumped out to a 29–16 first quarter lead, and Phoenix, looking beleaguered after three straight defeats, appeared ready to fold. The Suns rallied in the second, with Chris Paul springing to life. The teams traded runs in the third quarter, closing it tied at 77. In the fourth, it was too much Giannis. Antetokounmpo made eight free throws in the previous two games. He connected on 17—on 19 attempts—in Game 6. His 50 points was the seventh 50-point game in Finals history. It tied Bob Pettit for the most points scored in a Finals clincher. And it elevated Antetokounmpo into the rarified air of Michael Jordan and Hakeem Olajuwon, the only players to win an MVP, a Defensive Player of Year award and Finals MVP. “You did the [Finals MVP] justice,” Bill Russell, whose name is etched on the award, tweeted after the game. “What a great way to close it out.”This game, this series was about Giannis. But it was about so many more. It was about Mike Budenholzer, the embattled Bucks coach whose seat was on fire after Milwaukee fell behind 3–2 to Brooklyn in the conference semifinals. Facing elimination, Budenholzer coached the Bucks to two straight wins over the Nets, overcame the Antetokounmpo injury to win two games without him against Atlanta, and held his team together enough to win four straight against Phoenix.It was about Khris Middleton, the former second-round pick, former D-Leaguer who has propelled himself into the upper class of stars. With a minute to play and Phoenix within four, it was a Middleton jumper that pushed the lead to six and a pair of free throws seconds later that put the game away.

It was about Bobby Portis. Last fall, Portis was adrift. His last team, the Knicks, were one of eight excluded from the NBA bubble, and Portis admitted he was adrift. A text message to Giannis led to a two-year, $8 million deal with the Bucks. It was Portis who filled in for Giannis in the last two games of the conference finals, racking up 34 points to help push Milwaukee into the next round. And with chants of Bobby … Bobby … Bobby … echoing through Fiserv Forum on Tuesday, it was Portis delivering 16 points to help finish it.Get SI’s Milwaukee Bucks NBA Championship Commemorative IssueIt was about Jrue Holiday, P.J. Tucker and all the moves Jon Horst made to put this team together. “He’s the best GM in the NBA,” Budenholzer said of Horst, and there is mounting evidence supporting it. Horst didn’t draft Antetokounmpo—that credit goes to Hammond, who cannot be forgotten—but it was Horst that built the team around him. He signed Portis, flipped Eric Bledsoe for Holiday, went out and got Tucker before the trade deadline. Stars, deservedly, get credit for championships, but they don’t win them without the right support around them. And that’s what Giannis has. For years, Giannis bashing has been sport for NBA pundits. His playoff failures opened the door for him to be branded a regular season player, to have his accomplishments, particularly the two MVP seasons, marginalized. But playoff failures are a rite of passage. Michael Jordan was broomed out of the first round three straight times early in his career. Kobe Bryant didn’t make a Finals until Shaquille O’Neal became his teammate. LeBron James spent nearly a decade failing before an alliance with Dwyane Wade and Chris Bosh helped him break through. A Giannis championship was inevitable. That he did it in Milwaukee was remarkable. At the post-game press conference, wearing a shirt emblazoned with the face of Jim Paschke, the recently retired Bucks TV broadcaster, Giannis acknowledged it. “I could’ve gone to a super team,” Antetokounmpo said. “I did it the hard way. I f—ing did it.” Few expected Antetokounmpo to re-sign with Milwaukee last fall. Fewer believed he would make the kind of commitment—a five-year, $228-million commitment—that he did. He consistently declared the importance of winning a championship with the team that drafted him. And eight months after signing that contract, he has. “I couldn’t leave,” Antetokounmpo said. “There was a job I needed to finish.”Late Tuesday, as the celebration started and the confetti fell, Giannis beelined for the stands. He hugged his mother, Veronica. “My mom, she was selling stuff in the street,” said Antetokounmpo, “and now I’m sitting here at the top of the top.” He embraced his girlfriend, Mariah, and held his son, Liam, the latest entrant into a basketball family. Indeed, the biggest roar from Giannis came during a postgame interview, when he was asked about three members of the Antetokounmpo family—Kostas, a member of the Lakers last season, and Thanasis, a Bucks teammate—all being NBA champions. Giannis has been among the top NBA players for years now, but these Finals, this championship elevates him to an all-time great. He has always had the numbers, now he has the title to back it up. As he walked down back hallway, two trophies in his hands and champagne-protecting goggles on his head, Giannis connected with Thanasis, who was away from the team due to COVID-19–related health and safety protocols, on Instagram Live. He told Thanasis he was coming to his hotel. Thanasis, somewhat frantically, insisted he stay away. As the connection ended, Giannis smiled widely. ““I’m a f—ing champion,” Giannis said. “Nobody can take that away from me.”More NBA Finals Coverage:• Suns’ Chris Paul on NBA Future: ‘I Ain’t Retiring’• Giannis on Winning NBA Title: ‘I Did It the Hard Way’ Without Super Team• Kobe Called Antetokounmpo’s Championship, LeBron Praises ‘Greek Freak’• Suns’ Monty Williams Congratulates Bucks, Gets Emotional After NBA Finals Loss