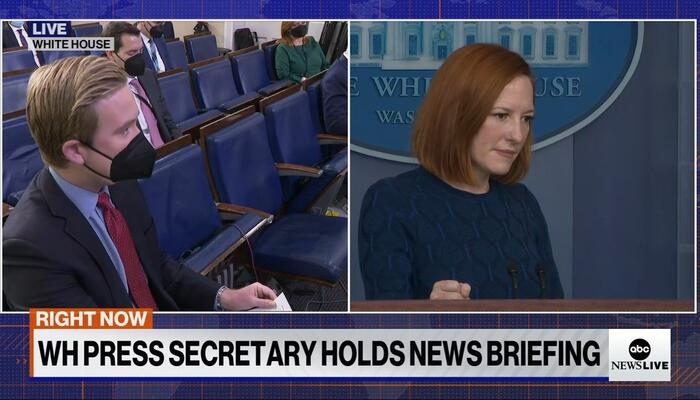 Fox News White House correspondent Peter Doocy returned to the Brady Briefing Room on Monday for the first time in 2022 following a mild case of Covid and promptly threw down with Press Secretary Jen Psaki over “why” was the Biden administration “so unprepared for the need for testing,” President Biden’s falsehoods about Covid spread, and disinformation from Justice Sonia Sotomayor.

After Psaki quipped that Doocy spent his quarantine “watch[ing] Fox [News] the whole time,” he tied his time at home to his first question:

I heard the President say, “Google Covid test near me.” So, somebody isolating with Covid. I did that, and the appointments everywhere were completely jammed, so why is it that you guys were so unprepared for the need for testing after the holidays?

Psaki initially blamed the shortages on “a massive surge in cases” and “unprecedented demand for tests” in New York and Washington D.C., but then painted a rosy picture of the administration’s current testing capacity.

Doocy was unmoved, starting with the fact that the tests currently available “require people to go somewhere and either make an appointment or wait in line” even though “[t]he CDC’s guidance is, if you think you have Covid, you’re supposed to stay home.”

“You guys said you were gonna mail free tests to people that need them. The President’s there on television talking about a winter of severe illness and death. While he’s saying that publicly, why weren’t you guys doing more to prepare for the winter,” he added.

Psaki showed her disconnect from reality, insisting “everyone decides where they’re going to go get a test, and, uh, we make a range of options available,” including the ability to “purchase tests online” and 500 million tests coming (eventually).

Doocy continued to press and brought up the role of the Postal Service in said tests (click “expand”):

DOOCY: But the President talked about a winter of severe illness and death. At the rate you guys are going, these tests are not going to be available until spring, so will you admit that these free tests you guys promised are not going to be ready until after the omicron surge?

PSAKI: I think I gave an update earlier that we’ll have — start to have tests out the door in the coming weeks very soon –

DOOCY: The Postal Service also delivered 98, 99 percent of packages on time in advance of Christmas, and they also – their leaders have also said they’re eager to take on this challenge, so we welcome that. And we’re looking forward to working with them to get these tests out to the public.

Speaking in plain English, Doocy acknowledged “that the science says the vaccines prevent death, but” he, like Psaki, was “triple vaxxed” and “still got Covid,” so “[w]hy is the President still referring to this as a pandemic of the unvaccinated?”

Twice asked this by Doocy, Psaki maintained that the administration has long said “there will be breakthrough cases” and it remains a pandemic of the unvaccinated as someone without the shots is more likely to face severe illness and death.

Before moving on, Doocy noted the White House has “been very aggressive countering Covid misinformation, so what do you guys think about covid misinformation coming from the Supreme Court and Justice Sonia Sotomayor’s false claim that over 100,000 children are in serious condition, many on ventilators?”

At the end of the briefing, Wegmann picked up on Doocy’s last question and further exposed the double standard on misinformation when it comes the one’s ideology. He also took on the issue of Chicago Teachers Union shuttering schools despite the science showing it’s safe to be in-person. Both counts, Psaki wouldn’t budge (click “expand”):

WEGMANN: I know you don’t want to weigh in on ongoing litigation before the Supreme Court, but not long ago in this room, the surgeon general told us that Covid misinformation was a public health threat. I’m wondering if the White House is at all concerned given Supreme Court Justices Sotomayor’s remarks about omicron variant that maybe the danger is being overhyped and your message is not getting out?

PSAKI: I think I just addressed this. Didn’t I answer this question?

WEGMANN: You answered it, but are you worried that there is misinformation that is being spread so much so that even the sitting Supreme Court justice has an inaccurate picture of things?

PSAKI: Again, I’m just not going to weigh in on a specific legal argument made in the court.

WEGMANN: And then I know you’ve been asked several times about Chicago. You said here. You’ve said it before. You know, the president clearly wants schools to be open. There’s been money that’s been allocated. Can we expect that the President will be more aggressive and use the bully pulpit to tell teachers unions in Chicago to get back in the classroom? I mean, this is the third – the nation’s third largest school district.

PSAKI: Well again, I would note the President has been very clear – as we have been clear we are on the side of schools being open. That is why he advocated for funding in the American Rescue Plan, and we will continue to convey that clearly because he believes the mental health impact on kids is – could be dire, and it is imperative that kids are in the classroom. More than 95 percent of schools across the country are doing exactly that and we’re hopeful that will continue to increase.

To see the relevant briefing transcript from December 10 (including an Afghanistan question from Wegmann as well as one from Fox Business Network’s Edward Lawrence on whether Biden would practice what he’s preached make The Beast all electric), click here.