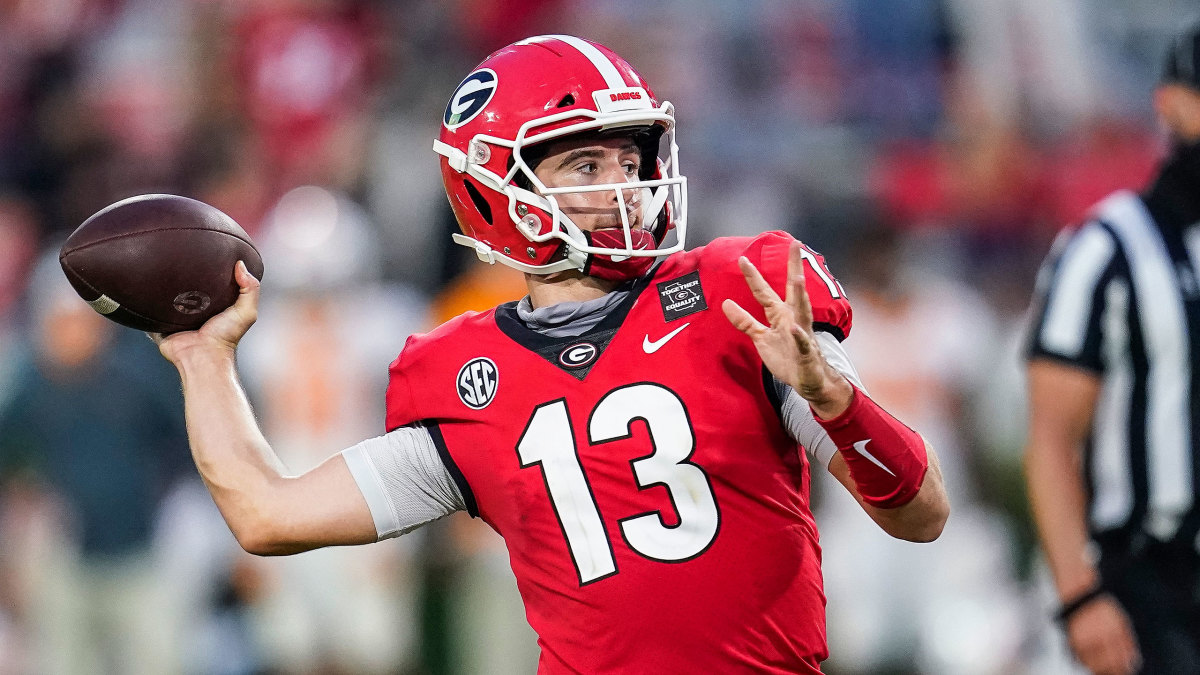 Alabama continues to be the betting favorite to win the 2022 NCAA Football National Championship, but which other teams are rising and falling?The 2021 college football season is through several weeks of action, so SI Betting is here with our first weekly look at the latest betting Championship Futures. Last season, college football fans witnessed the Alabama Crimson Tide post an undefeated 13-0 season, en route to the National Championship for the 18th time in school history. The question is can they run the table again, or will another team end their reign?Oddsmakers at SI Sportsbook believe in Nick Saban and the Crimson Tide, listing Alabama (2-0 SU; 1-1 ATS) as the favorites (+200) to win the National Championship for the second consecutive season.SI Sportsbook is offering new and existing users some great can’t-miss promos, including $50 in free bets as well as boosted odds on SI Special parlays and special wagers! Click here to take advantage of these opportunities at SI Sportsbook.Let’s dive in and see who has seen their odds rise or fall through the first two weeks.

Jason Getz-USA TODAY Sports
TOP CONTENDERSAlabama Crimson Tide (+200)Alabama’s Bryce Young has led the No. 1 Crimson Tide to wins over Miami and Mercer by a combined score of 92-27. In Week 3, Alabama (2-0 SU; 1-1 ATS) will head on the road to face No. 11 Florida. Nick Saban’s crew is a 15.5-point favorite over a Gators club that is 2-0 after victories over Florida Atlantic and South Florida.Georgia Bulldogs (+275)SI Sportsbook believes Georgia is the biggest threat to Alabama installing the Bulldogs as the second betting choice at +250 behind Alabama. No. 2 Georgia (2-0 SU; 2-0 ATS) has been impressive with wins over No. 6 Clemson and UAB. The Bulldogs, who have only allowed one touchdown through the first eight quarters of the 2021 season, are 30.5-point favorite over South Carolina in Week 3.Ohio St Buckeyes (+650)No. 8 Ohio State (1-1 SU; 0-1-1 ATS) holds its spot in the top three overall betting choices at SI Sportsbook, despite losing to No. 3 Oregon 35-28, as 14.5-point home favorites last weekend. Ohio State, a prohibitive -222 favorite to win the Big Ten Championship, is expected to get back on track on Saturday when they take on Tulsa as 26.5-point home favorites.Clemson Tigers (+700)No. 5 Clemson (1-1 SU; 0-2 ATS), despite being held without a touchdown in the Week 1 loss against Georgia, is still in the top five of contenders at SI Sportsbook at +700. D.J. Uiagalelei, who guided the Tigers to a 49-3 win over South Carolina State, has burned bettors going 0-2 ATS thus far in 2021. Clemson, who was 5-7 ATS in 2020, is becoming a tough team to trust against the spread for the second consecutive season. In Week 3, the Tigers are installed as 28.5-point home favorites over Georgia Tech.Oklahoma Sooners (+800)No. 4 Oklahoma (2-0 SU; 1-1 ATS), led by Heisman hopeful quarterback Spencer Ratter, is off to a flying start after beating Tulane and Western Carolina by a combined margin of 116-35. The Sooners are expected to remain perfect in Week 3 – indicated by a 22.5-point home spread over Nebraska on Saturday.

Adam Cairns/Columbus Dispatch/USA TODAY Network
RISERSOregon Ducks: Opened +4000 / Current +2000The No. 3 Oregon Ducks (2-0 SU, 1-1 ATS), fresh off their shocking road upset of No. 8 Ohio State, moved up from outside the top-10 to inside the Top 5. The Ducks are now the betting favorite at +220 to win the Pac-12 Championship as well, seeing their opening odds in the National Championship Futures’ market cut in half from +4000 down to +2000.Florida Gators: Opened +6000 / Current +4000The Florida Gators (2-0 SU, 0-2 ATS) garnered respect in the eyes of the oddsmakers after beating Florida Atlantic and South Florida with an average scoring margin of 21.5 points. On Saturday, the nation will see just how good the Gators are this season when they play host SEC rival Alabama in Gainesville.FALLERSIowa State Cyclones: Opened +4000 / Current +8000Iowa State (1-1 SU, 0-2 ATS) fell drastically in the oddsmakers’ power rankings after losing to Iowa, 27-17, at home last Saturday. The Cyclones see their opening odds of +4000 double to +8000 after the loss to the Hawkeyes.Texas Longhorns: Opened +5000 / Current +8000The Texas Longhorns (1-1 SU, 1-1 ATS), who were a target of respected money in Vegas a few backs, see their odds rise sharply after last week’s blowout loss at the hands of Arkansas. The Longhorns should get back on track on Saturday when they play host to Rice as 26-point favorites.SI SPORTSBOOK NCAA FOOTBALL FUTURES TRACKER

More College Football Coverage: The Coaching Search That Remade Florida Football Is Two Games Into the Season Too Early to Panic?Miami Fans Save Cat From Upper Deck Fall Using U.S. FlagFrankie Taddeo is a successful high-stakes fantasy football player who created the first-ever DFS program ever offered in a Las Vegas sportsbook. Frankie is SI Betting’s Senior Analyst and provides his significant experience and resources in the sports betting scene. You can follow Frankie on Twitter @Frankie_Fantasy for his latest betting and fantasy insights from Las Vegas.