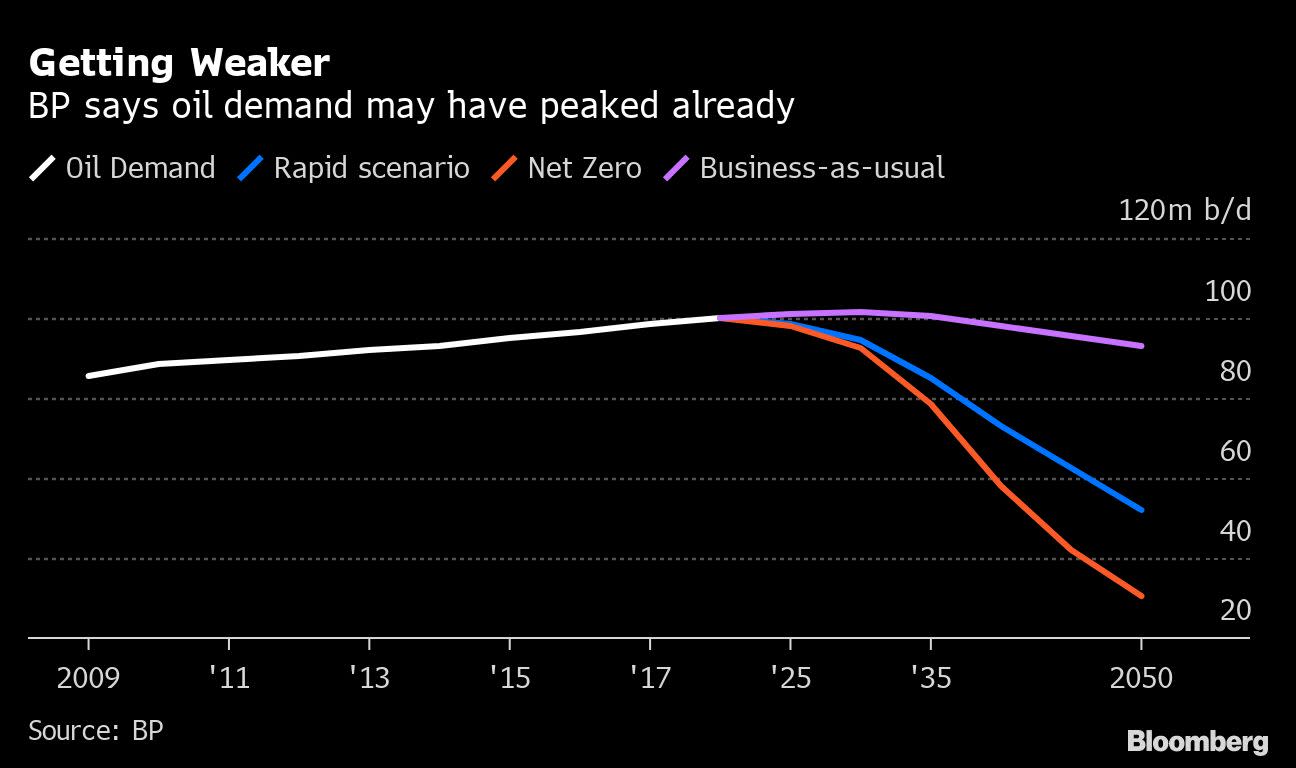 BP Says the Era of Oil-Demand Growth Is Over

(Bloomberg) — BP Plc said the relentless growth of oil demand is over, becoming the first supermajor to call the end of an era many thought would last another decade or more.Oil consumption may never return to levels seen before the coronavirus crisis took hold, BP said in a report on Monday. Even its most bullish scenario sees demand no better than “broadly flat” for the next two decades as the energy transition shifts the world away from fossil fuels.BP is making a profound break from orthodoxy. From the bosses of corporate energy giants to ministers from OPEC states, senior figures from the industry have insisted that oil consumption will see decades of growth. Time and again, they have described it as the only commodity that can satisfy the demands of an increasing global population and expanding middle class.The U.K. giant is describing a different future, where oil’s supremacy is challenged, and ultimately fades. That explains why BP has taken the boldest steps so far among peers to align its business with the goals of the Paris climate accord. Just six months after taking the top job, Chief Executive Officer Bernard Looney said in August he’d shrink oil and gas output by 40% over the next decade and spend as much as $5 billion a year building one of the world’s largest renewable-power businesses.That’s because he suspects oil use may already have peaked as a result of the pandemic, stricter government policies and changes in consumer behavior. BP’s energy outlook shows consumption slumping 50% by 2050 in one scenario, and by almost 80% in another. In a “business-as-usual” situation, demand would recover but then flatline near 100 million barrels a day for the next 20 years.Read: BP Walks Away From the Oil Supermajor Model It Helped CreateBP isn’t the only big oil company adapting its business to the energy transition. Royal Dutch Shell Plc, Total SE and others in Europe have announced similar pivots toward cleaner operations as customers, governments and investors increasingly call for change.Three Possible FuturesBP’s report comes ahead of three days of online briefings starting Monday on its clean-energy and climate strategy. The study considers three scenarios, which aren’t predictions but nevertheless cover a wide range of possible outcomes over the next 30 years and form the basis of the new strategy Looney announced in August.The “Rapid” approach sees new policy measures leading to a significant increase in carbon prices. The “Net Zero” course reinforces Rapid with big shifts in societal behavior, while the “Business-as-usual” projection assumes that government policies, technology and social preferences continue to evolve as they have in the recent past.See also: New EU Climate Plan Brings End of the Combustion Engine CloserIn the first two scenarios, oil demand falls as a result of the coronavirus, the report shows. “It subsequently recovers but never back to pre-Covid levels,” according to Spencer Dale, BP’s chief economist. “It brings forward the point at which oil demand peaks to 2019.”That contrasts with what many others are forecasting. Russell Hardy, chief executive officer of trading giant Vitol Group, said on Monday that oil demand is poised for 10 years of growth before a steady decline. He predicts consumption will return to pre-virus levels by the end of next year.BP’s outlook last year contained a scenario called “More energy,” which had oil demand growing steadily to about 130 million barrels a day in 2040. There’s no such scenario this time.“Demand for oil falls over the next 30 years,” BP said in the report. “The scale and pace of this decline is driven by the increasing efficiency and electrification of road transportation.”Covid ImpactThe pandemic shattered oil consumption this year as countries locked down to prevent infections from spreading. While demand has since improved, and crude prices with it, the public health crisis is still raging in many parts of the world and the outlook remains uncertain in the absence of a vaccine.The impact, including lasting behavioral changes like increased working from home, will affect economic activity and prosperity in the developing world, and ultimately demand for liquid fuels, according to BP. That means it won’t be able to offset already falling consumption in developed countries.Demand for liquid fuels is seen falling to less than 55 million barrels a day by 2050 in BP’s Rapid scenario, and to around 30 million a day in Net Zero. The drop is mostly in developed economies and in China. In India, other parts of Asia and Africa, demand remains broadly flat in the first scenario but slips below 2018 levels from the mid-2030s in the second.Other points in the energy outlook:The Rapid scenario has carbon emissions from energy use falling by around 70% by 2050, while they drop by more than 95% in Net Zero. Business-as-usual sees them peaking in the mid-2020s.Demand for all primary energy — the raw materials from which energy is derived — increases by about 10% in Rapid and Net Zero in the period, and by around 25% in the third scenario.In Rapid, non-fossil fuels account for the majority of global energy from the early 2040s.Growth in China’s energy demand slows sharply relative to past trends, reaching a peak in the early 2030s in all three scenarios.Renewable energy — excluding hydro — increases more than 10-fold in both Rapid and Net Zero, with its share in primary energy rising from 5% in 2018 to more than 40% by 2050 in Rapid and almost 60% in Net Zero.Natural gas consumption is seen broadly unchanged to 2050 in Rapid and around 35% higher in business-as-usual. Demand falls by about 40% by 2050 in Net Zero.(Updates with BP briefings in the seventh paragraph, Vitol CEO comments in the 10th.)For more articles like this, please visit us at bloomberg.comSubscribe now to stay ahead with the most trusted business news source.©2020 Bloomberg L.P.

Microsoft's Brand Chief on Working With the NFL During Covid