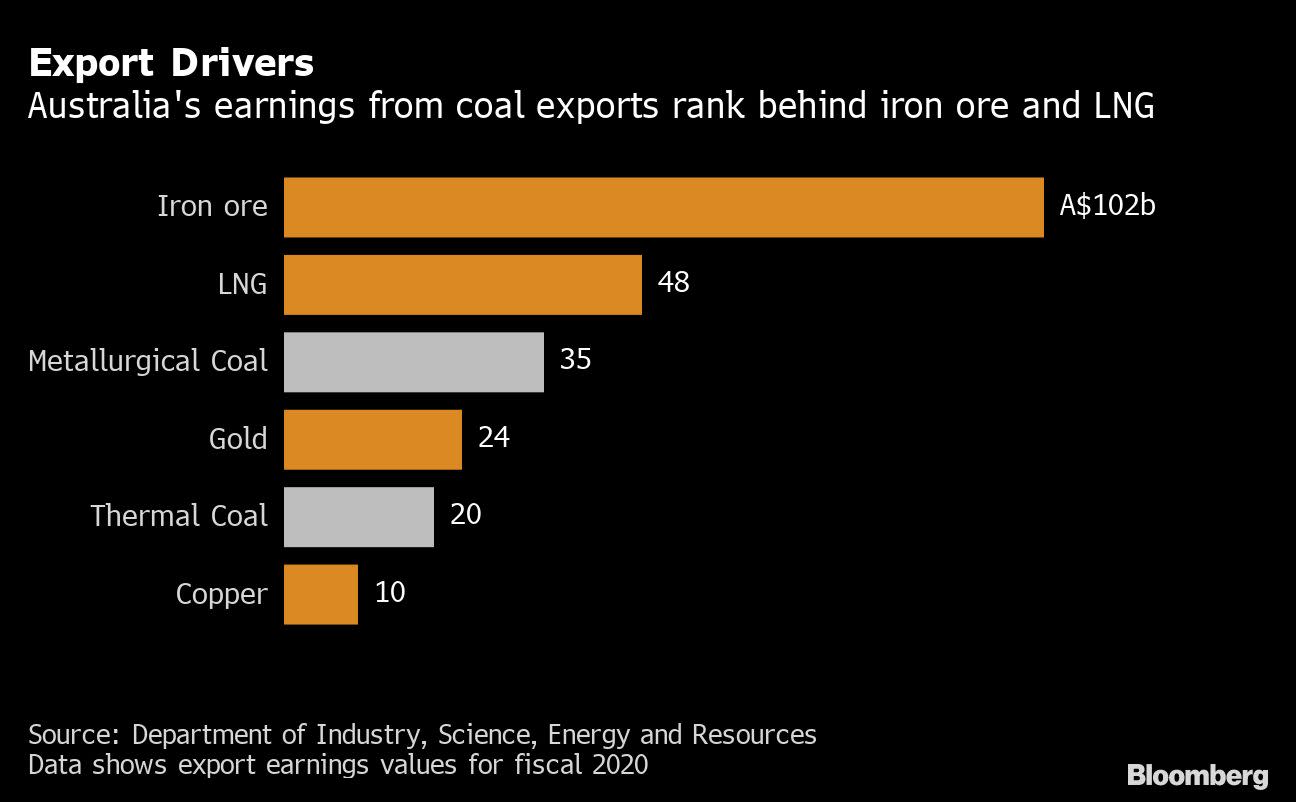 (Bloomberg) — The Australian government is seeking clarification from Beijing on reports that China has suspended purchases of Australian coal amid heightened diplomatic tensions between the two countries.Chinese power stations and steel mills have been verbally told to immediately stop using Australian coal, people familiar with the order said Monday, asking not to be identified as the matter is private. Ports have also been told not to offload Australian coal, one of the people said. It isn’t clear when the latest import ban might end or how it might affect long-term contracts that are already in place.“We are making approaches to Chinese authorities in relation to that speculation,” Trade Minister Simon Birmingham told Sky News on Tuesday. “We take the reports seriously enough certainly to try to seek assurances from Chinese authorities that they are honoring the terms of the China-Australia Free Trade Agreement and their WTO obligations.”China’s customs administration will further strengthen supervision of imports of the relevant products, a spokesman for the body said on Tuesday, while referring a question on the ban to an unspecified competent government department. Newcastle benchmark thermal coal prices fell by the most in almost four years on Monday as reports of the ban filtered through the market.The ban would mark an escalation in tensions that have already jolted agricultural exports from China’s biggest supplier of commodities. Beijing has objected to a series of diplomatic moves by Canberra that it viewed as supporting the U.S. in its trade and security dispute with China. Among other things, Prime Minister Scott Morrison in April called for independent investigators to be allowed into the Chinese city of Wuhan to probe the origins of the coronavirus.China is the top consumer of Australia’s metallurgical coal, accounting for almost a quarter of exports, according to the country’s industry department. Export earnings from the steel-making material were already forecast to fall to A$23 billion ($16.6 billion) in the 12 months to June 30 from A$35 billion in the previous year on lower prices and weaker demand, according to a report last month.The Asian nation is also the No. 2 destination for Australia’s thermal coal exports, behind Japan. Annual exports earnings in that market are projected to slide to A$15 billion from A$20 billion in fiscal 2019.The fossil fuel has been a previous target for China’s ire with what it regards as an increasingly hostile government in Canberra, most recently in 2019 when shipments became subject to port delays. Thermal coal is one of the few resources in which China is largely self-sufficient.Higher-quality coking coal is a different story. China produces less of it and the country’s steel-making giants are still dependent on overseas suppliers such as Australia, which typically accounts for over half of imports.“China increasingly relies upon high-quality coking coal for its steel industry, in order to maximize efficiencies and also reduce emissions,” said Gavin Wendt, senior resources analyst at consultancy MineLife. “Australia supplies the highest quality coking coal available and is a reliable, low-cost supplier. Both parties rely on each other in a major way, so I think there is more bark than bite in this situation.”Read: China’s Coal Import Ban Has More Bark Than Bite: David FicklingSome of Australia’s top coal producers took a hit on Tuesday, with shares in both Whitehaven Coal Ltd. and New Hope Corp. fell by more than 6% Tuesday. Coronado Global Resources Inc, which runs the giant Curragh coking coal mine in Queensland, dropped over 10%.“Trade with China changes through the year based on a range of factors, including quotas,” said Tania Constable, chief executive officer of industry group the Minerals Council of Australia. “Australia will continue to see demand for its high quality of coal and the medium-term outlook remains positive.”China keeps a tight grip on coal imports as it seeks to balance the needs of its miners and industrial users and the Australian government had anticipated a slowdown in shipments, given strong import volumes taken by China in the first half of the year.“China’s metallurgical coal import volumes in the second half of 2020 could be constrained by slower customs clearance processes,” the Department of Industry, Science, Energy and Resources, said in the quarterly report in September.If a ban is confirmed, it’s more likely to have been motivated by domestic market considerations, said Chen Hong, director of the Australian studies center at East China Normal University in Shanghai.“China will never use economic leverage for political gains — China has been criticizing the U.S. for using economic weapons, it will not do so itself,” Hong said.China is also the key buyer of Australia’s most lucrative export, iron ore, although curbs on that product would be a heavy blow to a steel industry that relies on vast — and cheap — supplies from mining heavyweights like Rio Tinto Group and BHP Group.(Updates with China customs comment in fourth paragraph; China analyst comments in 15th and 16th)For more articles like this, please visit us at bloomberg.comSubscribe now to stay ahead with the most trusted business news source.©2020 Bloomberg L.P.